Throughout India, in the kitchens of restaurants and homes, you will spot paintings of Lord Hanuman on the walls, many times above the stove. Divine monkey companion of Rama, Hanuman was the hero of the Ramayana, the Sanskrit Hindu epic. During one of the battles recounted in this classic work, the super-muscular Hanuman flew from India to Sri Lanka’s Medicine Mountain. Rama, an incarnation of Vishnu, had sent Hanuman to fetch herbal medicine for a wounded warrior. When the Monkey God arrived at the Verdant Mountain, however, he wasn’t sure what herb he was supposed to bring back, so he took the whole mountain of herbs back with him to India. As he crossed India, clumps of grass fell to the ground, scattering groves of sacred spices everywhere.

So you see, that’s why to this day there are a lot of spices in India…as well as in Indian gin.

Many of us were probably introduced to Indian-style gin through popular brands like Bombay Sapphire, a dry gin from London whose main flavor is juniper (as required by EU regulations), as well than ten other plants. Compared to gins like Beefeater, Bombay Sapphire is much more grassy and, to our palette, much more interesting, with more flavor dimensions and a fresh herbal bouquet. On the Bombay Sapphire label is a portrait of Queen Victoria, who presided over the period of British colonization of the Indian subcontinent, when the British introduced gin to India.

Like rum, Indian gin has a checkered history. Rum was grown on plantations maintained by slaves and British colonization of India lasted until 1947. During the period of colonization, gin, already important in England, came to India and was quickly adopted . In a sense, Britain took over India and India took over gin (but presumably under pressure from the Raj). History – especially, perhaps, the history of food and drink – is a sequence of appropriations, some less benign than others.

With G&Ts, “To Your Health” is the appropriate toast

Gin and tonic is probably the most popular application of gin, and this perennial hot weather drink was invented in India not only as a refreshing sip but also as a medicinal drink, a way to consume quinine, a bitter medicine and antimalarial. According to India Times“Modern and oft-repeated accounts of the… origins of gin and tonic attribute its invention to Indian army officers taking their daily dose of bitter quinine washed down with gin and soda. Some date this as early as 1825, just five years later. the first quinine extraction.

The only spice that gin absolutely must contain is juniper, because without this berry you can’t have gin – all you have is something like vodka, colorless and odorless. Given the abundance of spices found in the subcontinent, Indian gins tend to be full of delicious flavors that make it a more interesting cocktail than possible with a gin made only with juniper. The immensely popular Beefeater gin, for example, a standard in Chicago bars, is made from juniper; the Indian gins we have tasted have the distinctive flavor of juniper as one of many flavors. 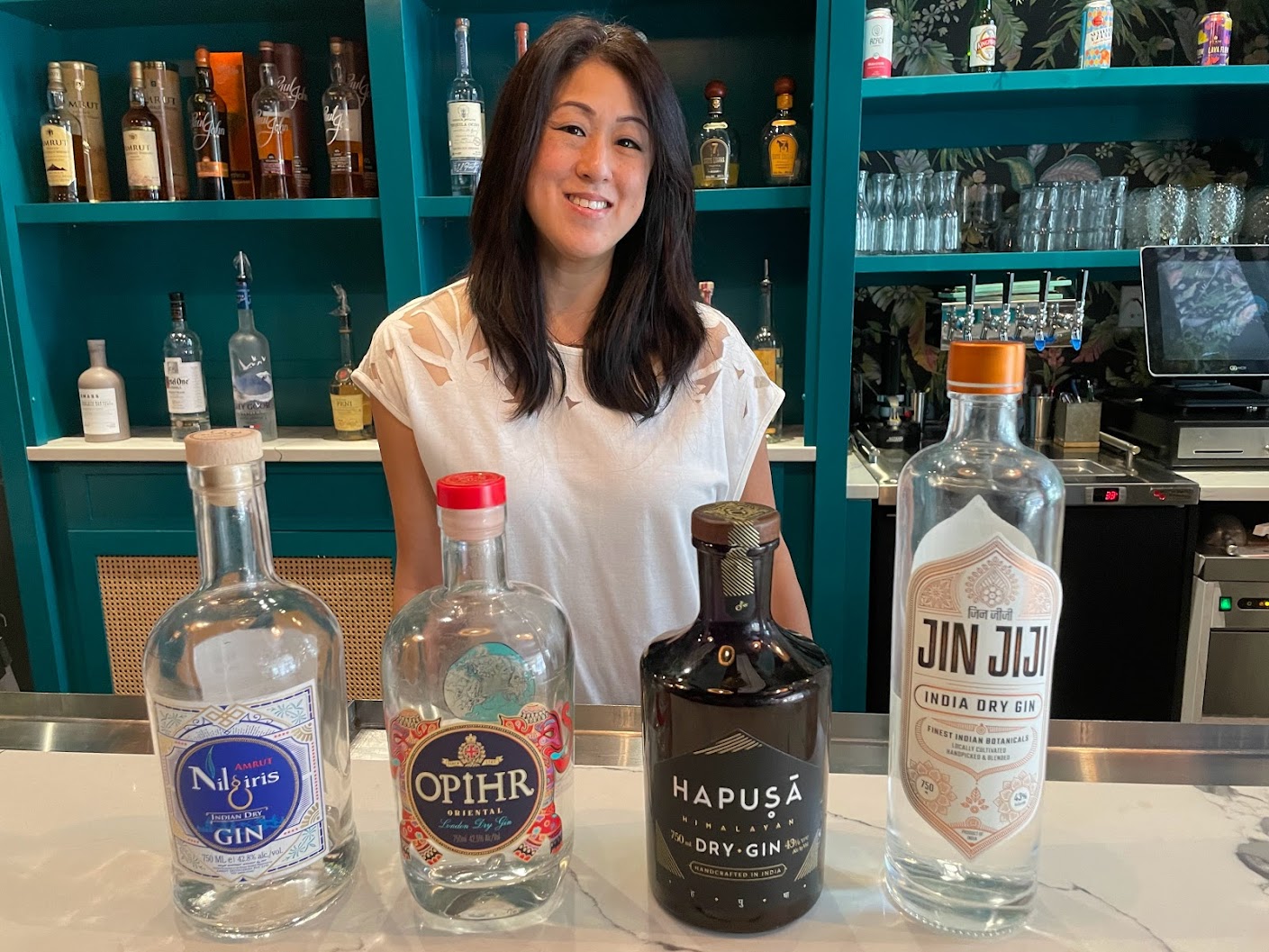 We recently had our first Indian gin at Bar Goa, in a gin martini, without vermouth, to better savor the flavors of the very grassy spirit. We knew there were more Indian gins on the menu, so we went back to sample some with Beverage Manager Allison Kim.

Kim tells us about a tasting of several Indian gins, each different, which is not surprising, given the wide range of botanical combinations available in Indian gins. Of these botanicals, Kim points out, “all the herbs used are fresh, and these Indian gins don’t contain essential oils, which is a kind of cheat sometimes used by big gin producers, but that’s a non- Nope”.

Jin JiJi is an Indian gin that we have seen in other places; it is served in cocktails at the Armitage Ale House and with/North River, and it’s one of the few Indian gins that can sometimes be found in stores like Binny’s. With a slightly floral nose, Jin JiJi is scented with juniper from the Himalayas, and the spirit is distilled with Darjeeling tea and spices including coriander and Tulsi leaf. Tulsi has a place in Ayurvedic medicine as a mouth freshener, so including it in Jin JiJi could be insurance against gin’s breath. It is also a smooth and very tasty sip.

Hapusa conveys delicate flavors of turmeric and mango, which Kim says “are ingredients you won’t find in British gins; these gins use products indigenous to India. Hapusa’s bright citrus flavors make it a great accompaniment to many appetite-enhancing cocktails. Produced in the Indian state of Goa, Hapusa uses locally sourced botanicals, which Kim says are “fresher and fuller in flavor than something that has been frozen or dried.” Flavors show up nicely in this take on gin, and producers call it a sipping gin. When we visit Kim, she serves us a few straight sips, and I must say, with a little ice, these Indian gins are among the few I would consider drinking with just ice, or at least a little bit of ice. water to bring down the delicious intensity.

Opihr was a ringtone that Kim throws into the mix. It’s a dry London gin, produced in England, but in the Indian style, flavored with more spices than you might think, including Indian Tellicherry black pepper, Indonesian cubeb berries and Moroccan coriander. From our first sip, we get a strong taste of cumin. Kim assures us that there is no cumin and that the flavor of the cumin was probably “the black pepper playing against the cilantro”. Whatever the cause of the high, if you prefer your drink to coordinate rather than contrast with your meal, Opihr would be a good gin with Mexican food.

Nilgiris, Kim tells us, was released around last year, and it incorporates the flavors of betel leaves, which grow on the same plant as betel nuts, a mild stimulant, sourced from Mysuru (Mysore). I chewed betel nuts, and hope they use betel leaves in this gin, but the flavor is elusive. I am also told that this gin conveys notes of angelica, orris root and Nilgiri tea, but on this point I will have to believe the more sensitive palates.

What all of these gins tell us is that there is a huge range of flavors in Indian gin. If you’re used to getting a specific brand of gin in your martini, even if it’s one of the great aromatic flavors from The Botanist or Hendrick’s, you might consider branching out. We did and we’re glad we did. 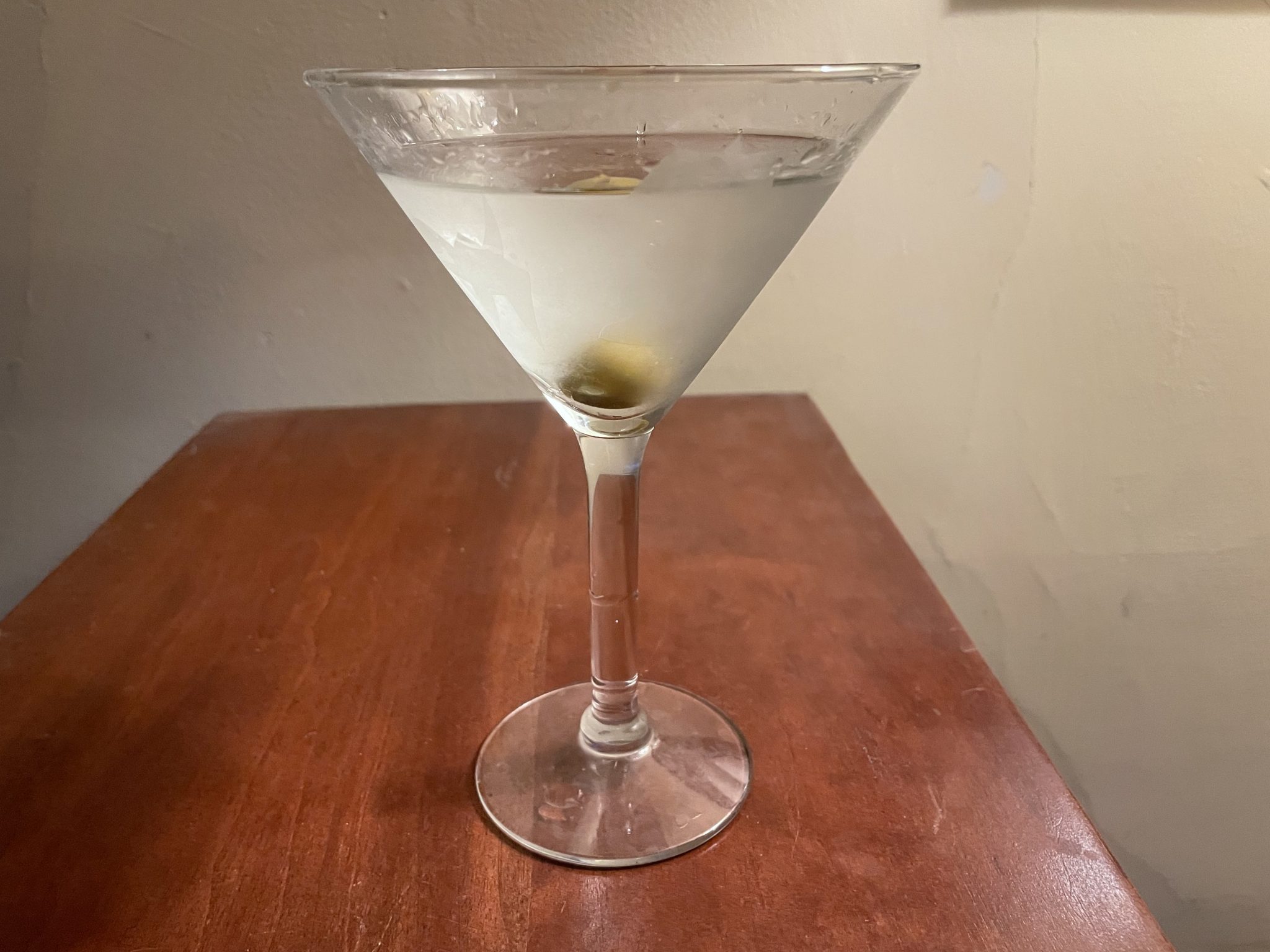 Gin versus Vodka in the Classic Martini

There are few cocktails more elegant than a martini. In the world of martinis, the two basic spirit choices — the ones most drinkers have had at one time or another — are vodka and gin. Although some cocktail recipes for the martini ask us to use vodka, most classic martini recipes use gin. (Still, we drink a lot of vodka martinis in this country.)

Years ago, I wrote about vodka with a slight sneer, a sneer shared by many bartenders I chat with. One of these bartenders, when asked what vodka is used for, told me, “The number one use for vodka is pouring over a nap to wipe down the touchscreen computer!”

Later, after chatting with Julia Momose, one of Chicago’s most thoughtful mixologists, I was able to better appreciate the potential of vodkas. Momose told us, “I would challenge people to approach vodka as if it had a bouquet of flavors dancing just below the surface. Sometimes all it takes is a little water, tea or juice to crack it open and bring those flavors to the surface. Maybe we all need to be more open to possibilities.

While I think Momose is right that there are flavors even in vodka that can be coaxed out with the right mix of ingredients, if you have a gin martini you have one of the simplest cocktails and simply elegant in the world. If you’re not a vermouth fan, a martini can even be just the base liquor and a splash of olive or lemon. For such a stripped-down drink – possibly a one-ingredient drink – it sounds like you’d want to use the tastiest clear alcohol possible. And whatever the benefits of vodka, there’s no way it has the range of flavors of gin, just about any gin, and as we’ve found, the gins with the most of flavor come from India.

Editor of restaurants and bars for New cityDavid also writes a weekly food column for Wednesday newspaper in Oak Park and is a frequent contributor of food/drink and travel coins to the Chicago Grandstand, Plate loader and other publications. David has also written chapters for several books, including Street food around the world, street foodand The Chicago Food Encyclopedia. Contact: [email protected]